Me on my 60th birthday 5 March 2016, wearing new hat bought at Walmart. This photo is my first “selfie” taken with my cell phone. 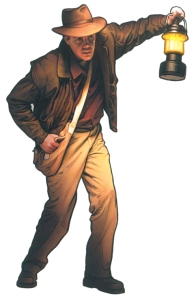 Jim Lantern is my legal professional pen name for the Internet as an independent journalist and as a science fiction author.

Me on 4 July 2008 at the Bishop’s Creek, Oklahoma University duck pond bridge in Norman Oklahoma.

Single. No children. Parents deceased. Not in contact with any living relatives.

Graduated from high school in 1974. College during 1974 and 1975. Business and computer courses during 2001 and 2002. I prefer apprenticeship, on-the-job training, hands-on experience.

Past professions about 10 years each include:

I’m a fan and writer of science fiction.

…I do not consider those two to be the best science fiction movies of all time but they are my favorite. I also like…

Favorite TV shows past and present include…

My favorite female performers in music include…

My favorite male performers in music include…

My favorite bands and others in music include…

In religion I’m basically a Universalist, more specifically a Spiritual Universalist, without also being Trinitarian or Unitarian. I’m more spiritual than religious. Out of the realm of science fiction, I’ve created what I’ve named Spiritual Universalist – “A Way of Life as a Virtual Reality Faith” – to present my idea that the physical universe is a kind of virtual reality for spiritual beings of the spiritual universe. Physically, we are their avatars. We are them. They are us. The physical body is like a car, and the spiritual soul is the driver.

I was born into a Republican family in the oil business. When I first registered to vote at age 18 in 1974, I was a Republican.

I became a Democrat during 1994. I found the Kansas Democrats to be in a useless state of anarchy, which I cold not tolerate.

I became registered as an Independent voter in 1995.

I’m not a member of any political party.

In 2008, I discovered I’m a “Centrist” after taking the World’s Smallest Political Quiz.

I served as a “soldier” in The Salvation Army during 1991 when I was age 35. I mainly did disaster relief work to help victims of floods and fires. Also, I was the weekend night manager for the men’s homeless shelter, which is what caused me to go into lodging business management the following year – 1992, my third profession.